ELAC BS 263 review: a speaker for all things loudspeaker 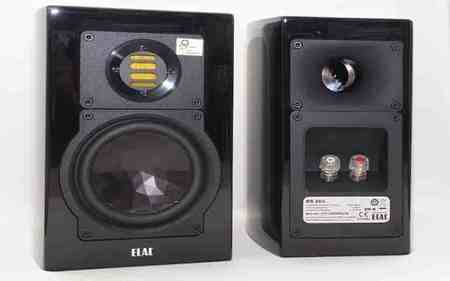 What loudspeaker should a music lover, gamer, videographer or avid movie buff? Ideally, your speakers should be versatile, compact, presentable and from a top brand. Sound too good? But that's exactly the kind of loudspeaker the German company ELAC has released. So here's what else the premium model has to offer.

Looks to match the quality

All audiophiles know the ELAC brand from birth. The first unit for home audio this German company has released in 1948. The abbreviation ELAC stands for Electroacoustics. However, you can't call the brand's equipment plain - remember at least the floor-standing Carina FS247.4 loudspeakers for which we did a review.

The ELAC BS 263 model is small, but chunky and weighty. The weight of each speaker is 6.6kg and the depth of the cabinet is the same 28.5cm at a height of 28.5cm. So the working volume is decent, because the bass capabilities of the system largely depend on it.

The enclosure is made from panels so thick and well damped that when you tap it, it feels like your knuckles are slamming against a granite monolith. The side panels are curved so the large, parallel planes don't cause internal standing waves and resonance. All in all, the speaker looks expensive and respectable. The lacquer applied is not just a glossy plastic or laminate but a highly polished, multi-layered finish. Just like in the real concert world, the exterior finish is available in two classic finishes: black or white.

The beauty of complexity

When you first encounter the "two hundred and sixty-thirds" you immediately notice the unusual look of the speakers. All sorts of grilles and overlays on the cones are often used for beauty in inexpensive Asian equipment. By the way, the hero of this review is in 260 series (together with floor model ELAC FS 267). The novelty is produced and assembled in Germany, as an affordable line of entry-level High End, and is sold in the local, Austrian and Russian markets.

The appearance of the drivers is due to advanced ELAC technological solutions, which the manufacturer uses in much more expensive, older models. Incidentally, ELAC is the first manufacturer to have implemented the Hale acoustic transformer in the best possible way. Not without reason the Jet drivers by ELAC are purchased by such manufacturers as Burmester and Audiovector for their speaker systems.

So, let's start with the squeaker. The yellow band, covered by a grille and surrounded by a small circular horn, is the diaphragm of the brand's fifth-generation JET transducer. The principle of operation is that of a Hale acoustic transformer. Here a wafer-thin polymer diaphragm is folded in an accordion and placed in a powerful magnetic field. A signal flowing through its conductive tracks causes the bellows to expand and contract, much like the fur of a real harmonica. When the folds expand, air is drawn in and expelled from the contracting folds at five times the speed of the diaphragm itself. Hence, in fact, the word "transformer" in the name. The extremely low weight of the diaphragm does an excellent job of minimising transient distortion and enhancing microdynamics in the high frequencies.

The unusual look of the bass driver is defined by the aluminium dome, the arch of which is made up of multiple triangular polygons. The complex shape is not stamped for aesthetics, but as a result of long calculation and experimentation. It shows that the surface has outstanding stiffness. It allows the cone to oscillate like a piston, even at high volume, without distortion or internal distortion. To overcome internal resonances, the metal plate was sandwiched over a paper substrate. Interestingly, a voice coil is separately fixed in each of these layers. Therefore, electrical energy is converted into sound energy with maximum efficiency and minimal distortion.

The ELAC BS 263 is a passive loudspeaker, so there is nothing inside except a separation filter assembled from audiophile quality components. Of course, with the exception of damping material and wiring made by the notorious Van Den Hul brand. It ends on the rear panel with large, handy terminals, above which there is a wide bass reflex socket. Its bellows attenuates turbulent air currents.

For our listening test we chose the Cambridge Audio CXN v2 network player together with a Yamaha A-S1200 integrated amplifier. The speakers were connected with Van Den Hul's Magnum Hybrid MKII cable - it's silly not to listen to the developers' choice.

The BS 263's sensitivity is average at 87dB, but the A-S1200 delivers 150 watts (per channel) to a 4 ohm load, just at the upper end of the speaker's recommended gain. The claimed frequency range extends from 41Hz to 50kHz (though no indication of unevenness of the frequency response).

As you know, you should not place the rear inverters close to the walls. To avoid loss of dynamics and intelligibility at low frequencies, it is better to extend the speakers forward by at least 40 cm. However, much depends on the musical taste of the listener and the acoustic characteristics of the particular room, so the best way to success is experimentation.

The position of the loudspeaker in relation to the listener is also worth working with. Turning the speakers slightly towards you, you are likely to achieve a clear audio stage with an almost palpable placement of musical instruments. This is a great option for monitor use, when the listener is alone and the distance to him or her is short. If a party or a home theatre session is planned, it is better to leave the squeaker planes parallel. In this case, the music space will literally open up and fill the entire volume of the room. But do not forget that ELAC BS 263 are shelf speakers, so energetic bass and tangible sound pressure throughout the range they will produce only in a room of adequate size.

Although the speakers are small, but they play in a mature way: good and atmospheric. This is due to the AS-XR's trademark 15cm woofers. They're fast and energetic, and the ribbon tweeters are a match for the good old domes, except in the most expensive and sophisticated models.

It is particularly pleasing that the excellent microdynamics and high frequency resolution here are not reduced to the unrestrained dominance of cymbals and high female voices over the rest of the soundtrack. At least not if you're not trying to listen to over-compressed MP3 tracks or albums recorded with infernal compression.

Now let's talk about the bass. BS 263 do not set records of club drive, however they easily cope with bass driven electronics, as well as classics and rich acoustics. Of course, each genre has its own nuances. Parov Stelar's electric swing album "Demon Diaries" in 24 bit delighted with an energetic big drum beat, which seemed to feature subtle touches of drum plastic. But they didn't detract from the ingratiating female vocals or the melody of the keyboards. Metallica and the Tokyo Philharmonic Orchestra playing Tchaikovsky are seemingly different universes, but one needs to turn up the volume to get the full effect. The ELAC BS 263 managed to perform admirably, even at a provocatively high volume. And without any tearing or blatant distortion.

ELAC BS 263 are high-end monitors with a wide range of applications. In a small or medium sized room they will please both the refined audiophile, the avid film buff and the hardcore party goers. You just need to take care of proper placement and don't skimp on quality amplification. The model cannot boast extra deep bass, but the rest of the range is clear, very detailed and with enviable energy. The speaker also looks superb in appearance.