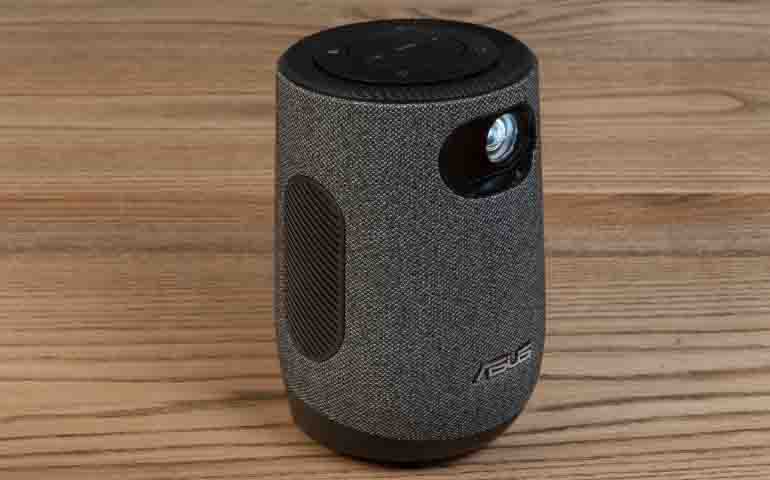 ASUS has its own line of projectors, which is represented by multimedia, compact and, more recently, professional models of the ProArt series. All of them may not necessarily be used permanently and for the most part are suitable for portable use. But relatively recently, the company also has an ultra-compact projector - ZenBeam Latte L1, which, in accordance with its name, is no larger than a cup.

The projector is designed minimalistically both from a visual and technical point of view. In the case-cylinder, which fits in the hand, an LED lamp, two speakers, a battery and a pair of connectors are assembled.

The case is upholstered with fabric, which not only adds aesthetics, but also absorbs light shocks. Although LED lamps are not particularly afraid of them, a well-assembled case gives some peace of mind. The upper section of the cylinder with buttons is represented by plastic, the lower strip of the side surface is also.
The base has three rubber feet and one that slides out to allow you to lift the projector. It also has a standard tripod socket. If, say, the presentation is planned open-air, where it will not be possible to provide a sufficiently high base for it, a conventional photo tripod will be a convenient solution.
On the upper plane are all the menu and content control buttons. Power on, navigation arrows, they are also volume changes, turn on Bluetooth and quickly go to the settings menu.

The set of ports includes USB Type-A for multimedia keyboards or flash drives, HDMI so that content can be output directly from a computer, 3.5 mm audio to amplify the sound and a connector for a power supply.
There are no optics for zooming the picture, so the diagonal needs to be adjusted by moving the Latte L1 away from the projection plane. By moving the projector a distance of one to just over three meters, you can get an image from 40 to 120 inches. The user will have to adjust the sharpness of the picture at the selected distance. And the electronics will set the correct aspect ratio and keystone to get a rectangle on the wall, even if the projector is not at a right angle.

As it is already becoming clear, everything in ZenBeam Latte L1 is designed for wireless use. It can stream content from Android and iOS devices. Each of these operating systems has a wireless content broadcast point, for which it is enough to be in the same Wi-Fi network with the projector. Windows also has this feature, and even if Уcast to screenФ from the toolbar does not help, you can look at the Уcast to deviceФ context menu of the media file. The principle is the same - Windows finds all playback devices on the local network and broadcasts the file to them through its media server.

All this is framed in the Android software environment with a modified shell. There is no Google Play here, but something called Aptoide TV is used, so all applications must be looked for in its alternative store. At least there are streaming services like YouTube and Netflix, as well as various utilities like IPTV clients, video players, etc. However, we would not call this shell comfortable. Everything is in order with the speed, the processor is quite productive here. But the applications crashed a couple of times, and the connected flash drive was recognized, but then disappeared from the file manager. As a result, unexpectedly, the most working option was the Windows media server and its variation using streaming in players like VLC. The Bluetooth connection, which turns the projector into a wireless speaker, also worked stably. Also, the "blue tooth" allows you to transfer links to YouTube videos from your smartphone to the projector. Although logging into your account from the projector still seems like an easier way.

The color gamut is standard, approximately corresponds to the sRGB space. The native resolution of the projector is 1280x720. At the same time, one must understand that such compact dimensions of the case did not allow the use of powerful lamps. A brightness of 300 lumens is more likely to be enough for a couple of meters from the screen, provided that an image (presentations, photos) that is light in color content is shown. Watching movies is best when the environment is as dark as possible. Audio accompaniment in the form of two built-in speakers can not be called powerful, although there is a Harman / Kardon logo. Using the projector in nature, the birds singing and the wind in the tree branches will surely drown it out.

Here it is worth mentioning the modes of operation. You can adjust the brightness, color mode, and projection surface color. And to this also choose a color palette for the "presentation", "theater" (artistic content, that is). There is also a "standard" setting and an "eco" setting. In the latter, the brightness of the picture is reduced. So the projector from the built-in battery can work up to 3 hours, which we personally observed. If the situation requires maximum brightness, the user has a couple of hours before the projector is discharged.

ASUS ZenBeam Latte L1 is an interesting attempt at an ultra-portable projector. He can become an assistant at outdoor events when it is not known whether there is a projector or a large TV in place. For displaying content in the field, the ZenBeam Latte L1 fits well.

If color rendition is important for the displayed content, there is a sufficient set of color palette and brightness settings. Options for connecting to the source are also implemented all the most relevant. Adaptations to the color of the projection surface are a very necessary thing in general and emphasize thoughtfulness. By the way, autonomy is not only three, but even two hours will be enough if the show takes place completely in the.

The only thing missing is the sound power if the video is accompanied by a meaningful audio series. In terms of price, this solution is not the most expensive on the market when compared to compact projectors in general. However, there are models with noticeably more powerful preparation, which will provide both more powerful sound and brighter light to compensate for lighting, but the price will also increase by 30 percent.